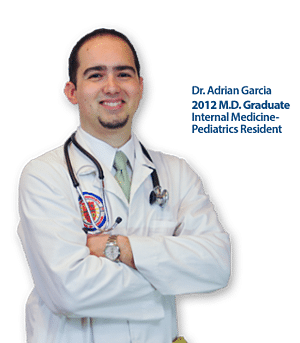 Trinity School of Medicine has always prided itself on the strength and ambition of its students. So many of our future physicians come our way looking for something new; whether that’s a unique learning environment built on support and a strong relationship with the faculty, a curriculum with an emphasis on clinical skills and service to patients, or just a fresh start this. We have so much to offer, so it delights us when each and every qualified student decides to take the next step in their medical education with us, with Trinity.

To formally express this gratitude and pride, we are launching an alumni spotlight feature here and on our website, highlighting the careers and accomplishments of our graduates. In this inaugural post, we’re very excited to check in with Dr. Adrian Garcia, a 2012 graduate of Trinity School of Medicine.

Dr. Garcia, a Miami-raised FIU graduate, enrolled at Trinity for the January 2009 term. He turned down his other medical school options to attend with a university colleague. They joined the intimate mid-year term, and Dr. Garcia quickly fell into step with the program with focus and an eye for opportunity. Like many of our January matriculants, despite technically starting a few months after the traditional September start, he participated in the 2012 residency match along with the US and international students that began their education in autumn of 2008. It’s worked out well for him, too. He is now in the fourth year of his internal medicine-pediatrics (med-peds) residency at Metro Health–University Hospitals Case Medical Center at Cleveland, Ohio.

Why med-peds? After his step 1 exam, he began his third year with rotations in internal medicine and then pediatrics. He fell in love with both specialties. He wasn’t sure which direction to go at first, until he realized that there was a specialty that combined both his passions available; med-peds. Having achieved top step scores and excellent grades, Dr. Garcia focused on matching with the specialty that had captivated him from the beginning of his rotations. While he credits Trinity with adequately preparing him for his residency, he admits he felt as if he were “middle of the pack” when he first arrived. This only motivated him further, driving him to further apply the clinical lessons he learned at Milton Cato Memorial, Trinity’s affiliated teaching hospital.

While his is typically a four year residency, Dr. Garcia has been asked to remain an additional year as chief resident. Having been recognized by his hospital as a high achiever and leader with great potential, he will serve a term working as a go-between for the staff and residents, and offer guidance to those soon joining him in the hybrid specialty.

When asked what stood out most about Trinity, he said it was the accessibility to, and the relationships with, the school faculty. He also wanted to make sure that Trinity students, current and future, remember that every decision you’re faced with is a different opportunity to shape your future, and where you may start, for whatever reason, doesn’t have to limit where your next steps take you.

We couldn’t agree more, Dr. Garcia. Thank you so much for joining the Trinity family and continuing to do such great work. We’re very proud of what you’ve accomplished and what’s yet to come for you.