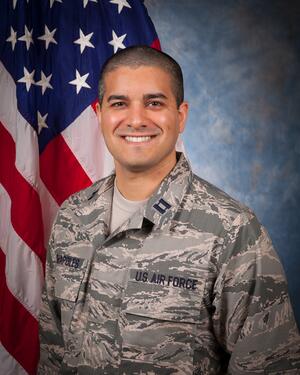 Trinity School of Medicine has always prided itself on the strength and ambition of its students. So many future physicians come our way looking for something new; whether that’s a unique learning environment built on support and a strong relationship with the faculty, a curriculum with an emphasis on clinical skills and service to patients, or just a true opportunity to live up to their potential.

In this latest edition of our alumni spotlight, meet Dr. Christopher DeNapoles. Read how he came to Trinity, the opportunities he found after residency, and his path to training as a flight surgeon in the US Air Force.

What sent you down the path to medicine?

I actually started wanting to head into health and fitness. As I went through my education at Arizona State University, I kept wanting to take it to the next level. Along the way, my majors were kinesiology, business, psych, and nutrition. I ultimately graduated with a double major in business and kinesiology, with psych and nutrition minors. My drive to keep going deeper progressed until the next logical leap was becoming a physician.

Did you apply in the US?

I did, yes. I tried one application cycle. After it didn’t work out, I decided I didn’t want to wait another, so I started applying to Caribbean schools.

What ultimately made you pick Trinity?

After I interviewed with Trinity, I just liked the feel of the place. I liked that it was a smaller school, not the other bigger ones (500-1000 students in a class). I knew I needed a more intimate learning style, more of a personal approach and faculty interaction. Trinity offered that, so I went that route. I was actually in the school’s second class, in their inaugural year. I’m still in touch with a lot of my classmates from back then. It’s a community that’s held together both over time and through the stress of residency.

I was actually president of student body [ed. now known as the Student Government Association, SGA] when I was there. Every semester there was student government fee, and when I was president, I decided to put the money to good use. I got access to the funds, recruited some students as labor, and we painted a big Trinity mural and built out the school’s first gym and athletic fields. [ed. that mural is still there today, almost ten years later!]  We also established the first faculty awards, helped kick off white coat ceremonies, which a lot of people don’t realize are a pretty new thing in medical schools.

I also co-founded the Society of Medicine and Surgery, something I’m very proud of. We kicked off a lot of outreach, stuff like doing blood pressure checks at grocery stores, orphanages, as well as offering asthma prevention clinics. We got some of the first dummy arms and offered suture clinics, IV training, etc.

One of the ways I actually financed my education was I’m a commodities trader on the side. I started in college and kept it up when I could through medical school.

Do you miss anything in particular from your time on campus?

The Guinness ice cream! You can’t get it here. Also, there was a local woman named Anita that lived on the other side of the fence from campus. For five dollars EC, she’d make you an incredible egg sandwich and she’d hand it through a hole in the fence. It got to the point where we actually had her “cater” SGA meetings!

How did you feel heading back into the US for rotations? Did you feel prepared?

Rotations back then were different than how they are now for Trinity students. I was in Chicago, Washington DC, and New York. It was nice to see different cities, three major metro areas, for an extended period of time. I felt that it was definitely difficult moving, though, and a little disruptive. The stress, making new friends, meeting new people, all done in different areas is definitely a challenge. [Ed. This is something that Trinity students no longer have to account for. Core rotations are all done at our affiliated hospitals and practices in Baltimore, MD.]

I felt prepared, though. Adaptability is big in medicine, and having gone abroad to train helps you develop those skills. You need to keep using them, though. It’s part of the education. As far as the medicine itself, I definitely felt prepared. Trinity gave me a lot of opportunities with patients, even back then, that students from other schools just didn’t get.

Any advice for current/future Trinity students?

Expect medicine to be hard, know what you’re up against. If you are mentally prepared, you can learn the ropes quickly, dive in fast, and get acclimated as fast as possible and focus on learning as much as you can.

On a personal level, I questioned whether or not it was worth it to be a doctor until my residency finished. The process is long and intense. It’s test after test, it gets expensive, you’re racking up loans. Then there’s getting into residency, working crazy hours (labor laws go out the window for the most part), but now that I’m an attending? In my first four months, I already feel that all of it has been 100% worth it. My life did a complete 180° once I got into that “real world” of medicine. Every professional aspect you can imagine changed for me.

How do you feel about specializing in family medicine?

It’s been great, honestly. On a week-to-week basis, I learn more and more about what I can do, where I can go from here. I just keep getting new opportunities. It’s been a somewhat surprising launchpad to a lot of tremendous career paths that I didn’t consider beforehand, even with my research into the various specialties themselves. For example, after finishing a family medicine residency, I can go do a fellowship as a hospitalist, in primary care, or urgent care. I personally went with urgent care; I really love it, I’m also picking up shifts in local emergency rooms and I recently joined the reserves. I’m training to be a flight surgeon for the United States Air Force.

Jumping back, you’re actually our second graduate to head to the US Air Force after finishing a residency. What took you down that road?

When I was in college I was in the ROTC, my personal belief is everyone should try and contribute in some form or another to their country. It’s something I always wanted to do. There are opportunities above and beyond the normal for doctors interested in military service, so off I went.

The professional opportunities are nearly limitless. The schools I have access to through the military, the various courses and medical certifications are incredible. I also get to learn how to do all sorts of different things all over the world related to military readiness. So that, supporting our soldiers, how could I not?

What does serving as a flight surgeon entail?

A flight surgeon trains to provide medical care on airborne hospitals/operating rooms. They train us to fly the planes as well, should the need arise in an emergency.

I actually have a training coming up. There are several different flight schools you go through, water survival through SERE, different training on prepping troops to be housed in different parts of the world in terms of local diseases and infections, as well as different courses on bioterrorism and biowarfare.

Thank you so much, Dr. DeNapoles, for taking the time to speak with us and for answering your call to service in the Air Force! Like all of our graduates, you do us proud.