In late November 2016, an eastbound trough storm system impacted St. Vincent and the Grenadines, producing exceedingly heavy rains that resulted in serious flooding and  landslides & slippages in some areas, mainly on the Northeast and Northwest sides of mainland St. Vincent (For context, the campus is located in the southern region, on more forgiving terrain and sheltered by the island’s mountains).  The devastation caused by these two days of incessant showers destroyed several homes and vital roads; entire fields of crops were washed away. The water and electricity supply in some areas were disconnected, leaving these communities without a ready supply for more than a week, and in some very severely affected areas, up to about three weeks.  One of the most severely affected areas in the country was an area on the North Eastern side of the country called Sandy Bay. 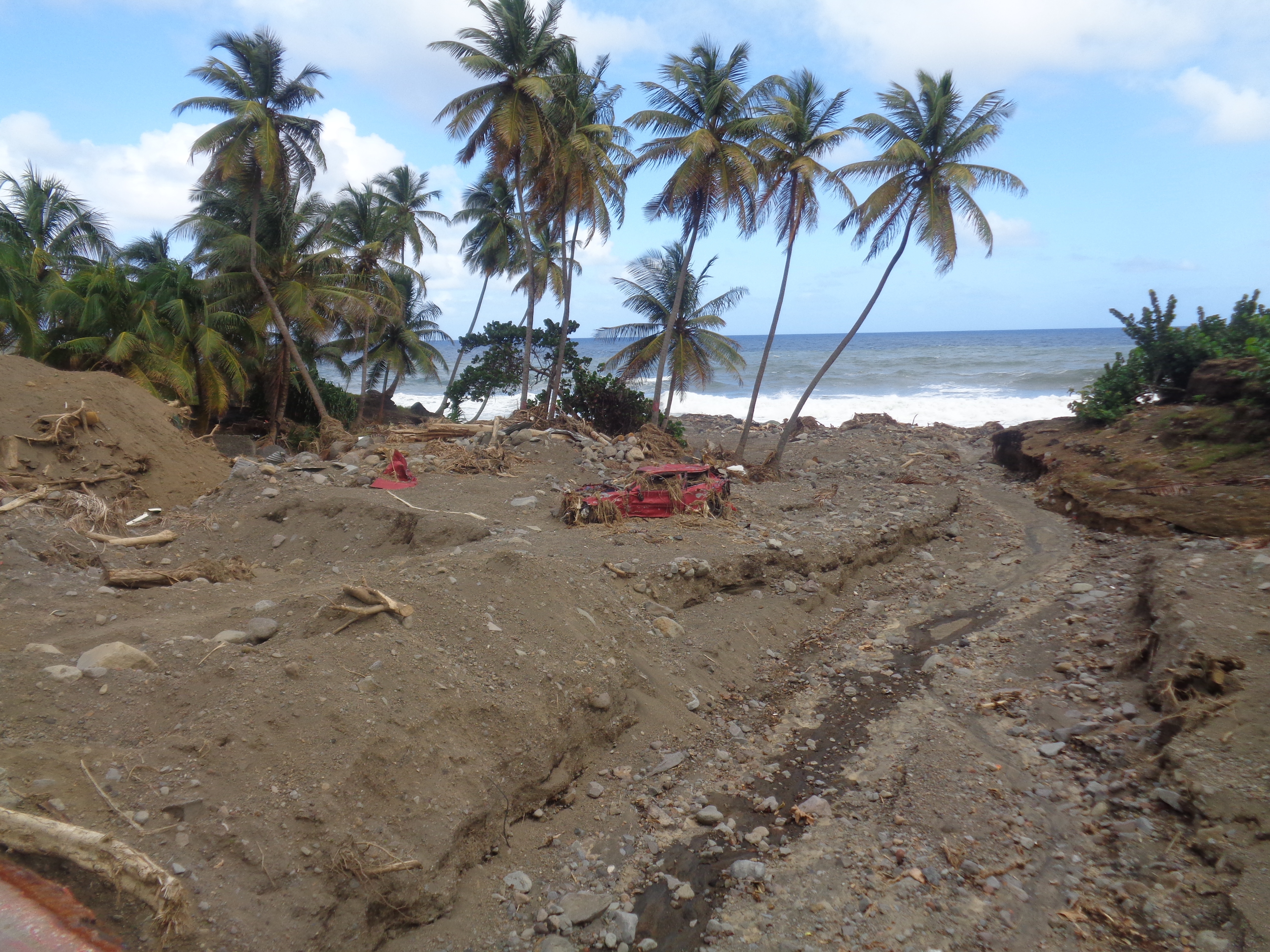 Sandy Bay, situated in the North Windward constituency of the island, consists of a number of villages that are home to the descendants of the indigenous peoples of the country – the Garifuna and Kalinago peoples. The storm wreaked widespread devastation through the community. Some families were displaced with houses being totally or partly destroyed, farm lands carried away, utility services absent for periods lasting up to approximately three weeks, and food and clothing in very short supply.

Families were accommodated in the designated hurricane shelter which was located at the Sandy Bay Primary School.  A total of one hundred and ninety-seven persons were housed there, constituting some thirty-seven families.  As time progressed, some of these persons were relocated with other family members.  For persons who did not have anyone to go to, the National Emergency Management Organization (NEMO) rented premises to accommodate them.  These persons who had completely lost their properties are currently being assisted with land to rebuild their dwelling. 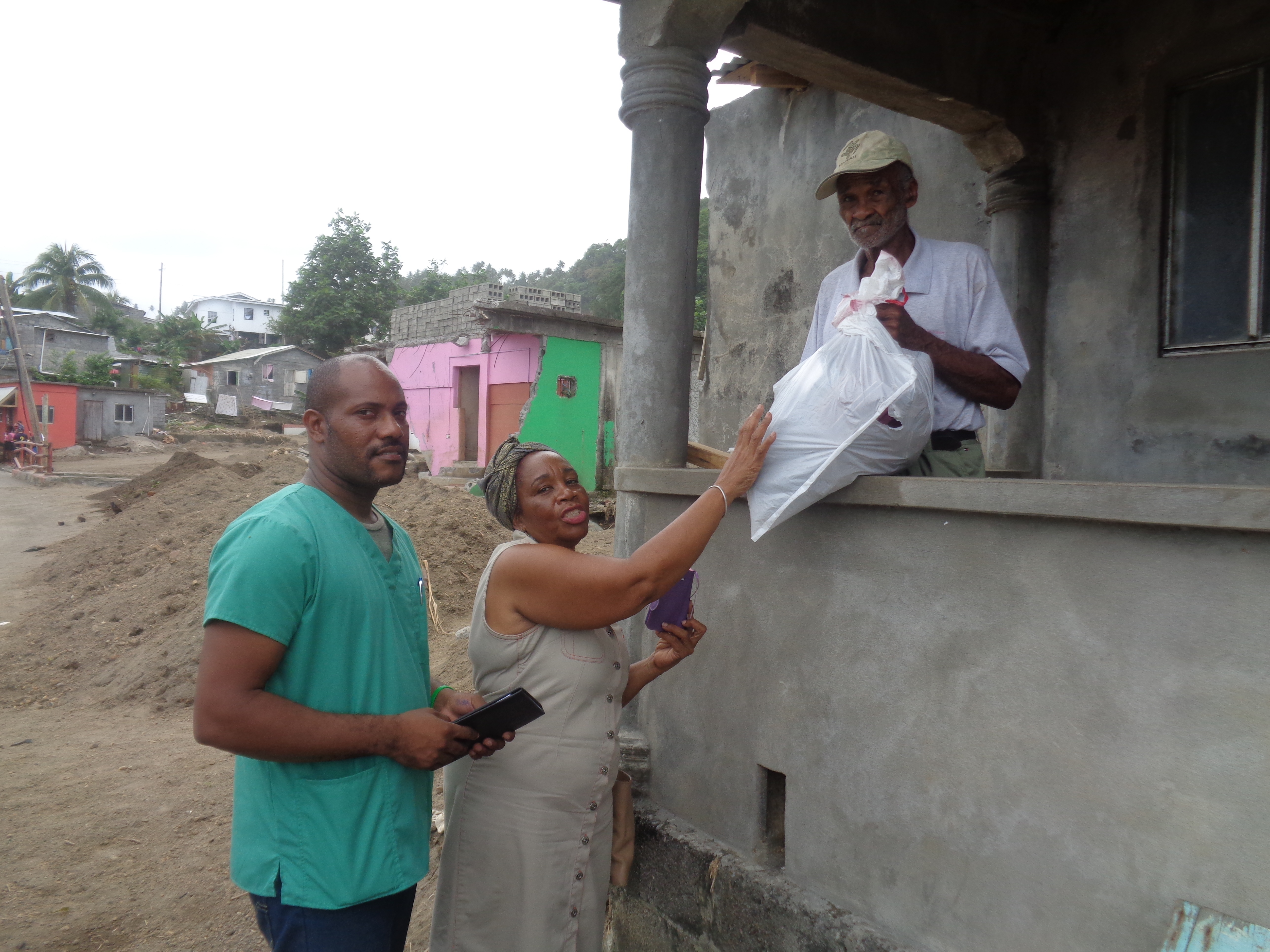 To assist in addressing the short fall during rebuilding, Trinity School of Medicine staff traveled to Sandy Bay to distribute new and gently used clothing, bed linens, footwear, toiletries, and school supplies for the local children, as well as Christmas gifts. According to Mrs. Kaushalya Nedd, head of the deanery at Trinity, “Every end of term, the departing students donate clothes, bed linens and other items to be donated to a worthy cause. This year, because of the devastation here, we decided to do the donation in Sandy Bay.”  Additional items were sourced from Trinity faculty, members of staff, and their family; with wrapped gifts donated by the Canadian Medical Students Association.

Shelter coordinator Owen Baptiste was on hand to take the visitors throughout the community. He took them through the villages of Old Sandy Bay, Sion Hill, Trechtown, and Karoy.  With each stop, the villagers were greeted and assembled to receive the donations. Individuals were able to receive up to five changes of clothes in many instances. Sneakers, sandals and other footwear were also given out to the adults, some of whom also received gift bags of toiletries. The sick and elderly were given sheets, pillow shams, towels and toiletries. Children received clothes, toothbrushes, pens and pencils, and notebooks.  As a special treat, the children were given gifts covered in traditional Christmas wrapping. This produced many smiling, happy faces.

By the same token, shelter coordinator Baptiste was effusive in his praise for Trinity’s efforts.  “This is indeed bringing cheer to these persons because, to be honest, in one way or the other, food and clothing are very vital now. People are living under severe conditions at this time, trying to get their lives back together.”  He went on to explain that having mostly engaged in farming as a livelihood and the majority of the residents’ crops was lost during the disaster. He further elaborated on the scenario to explain the eagerness with which the residents flocked to the area to receive the donations of necessary items from the eagerly willing hands of the volunteers from Trinity.

As a matter of fact, a mother of three children between the ages of four and nine years old, called her experience ‘luck’.  “I feel very lucky today,” she explained, “When most of the other donors come out, we do not get anything, the time it takes us to get from the rocky area close to the bay where we live to where the donations are distributed, everything is finished when we arrive.” 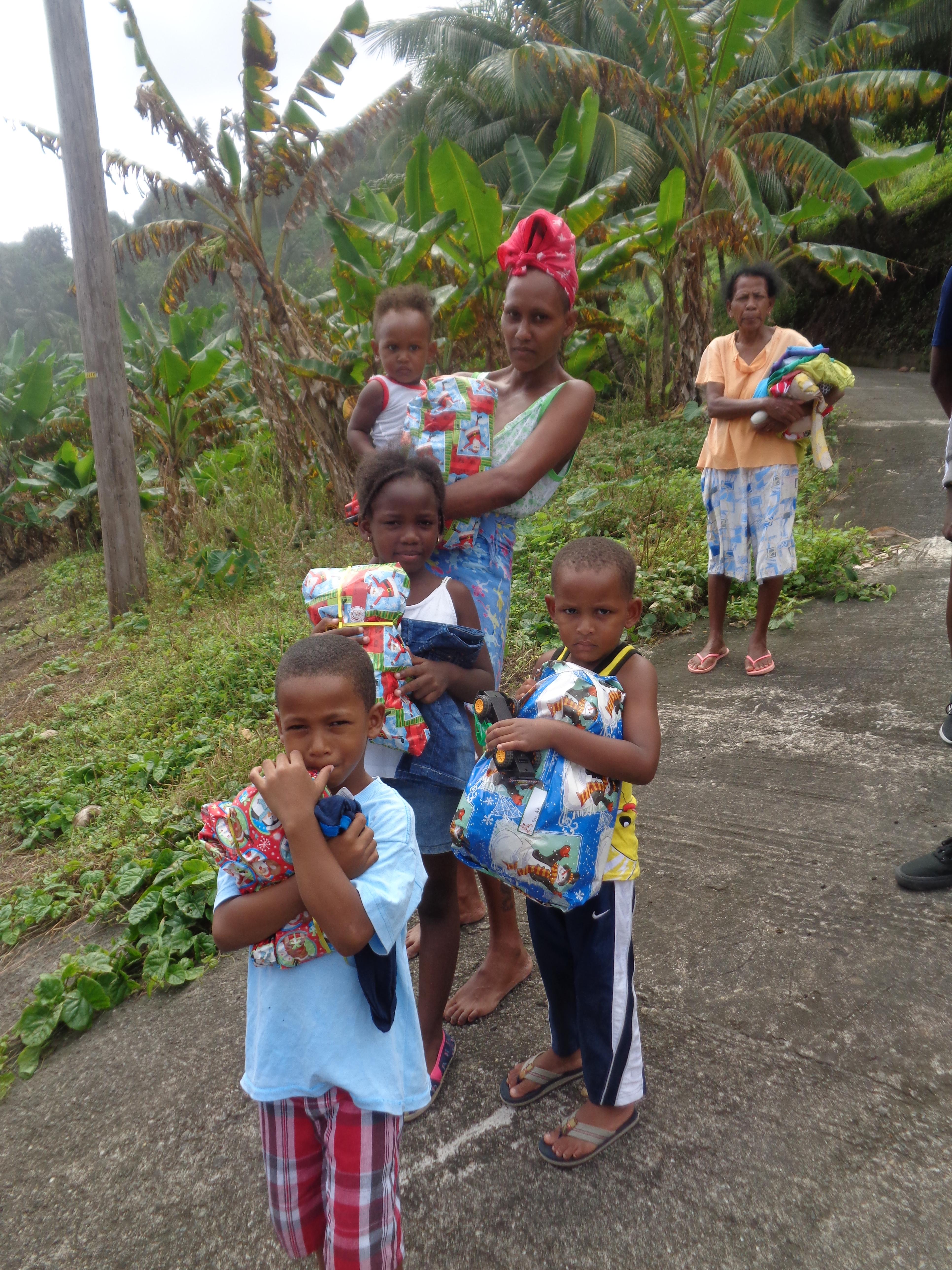 Oregon McDiarmid, president of Trinity’s Student Government Association was part of the distribution party. Choked up with emotion for the plight of the residents, he gave the following statement, “What I heard about the devastation up in this area did not at all equate to what I saw today.  When you hear about a disaster, you hear about how tragic it is and about how much help is needed, but seeing it up close is very different.  You see how very little they have and how much damage has been done; but it’s not just losing everything, it’s losing the foundation, that safety net that comes in with our society.  Seeing it up close has changed my point of view of it.  It has shown me how serious the situation was.”

He continued, “I think it is a really great first step in building a relationship and continuing to maintain the relationship between Trinity and the community, here.” He was adamant, “I think we should continue to help out any way we can.  I think that when I relate my experiences here today, the students will feel very similar to how I do where it’s very tragic and we’d want to help out.  We might not have the most resources in the world but we have a lot of power behind us.  We have people who would want to put forward time and effort and a lot of good faith.”

Trinity’s act of benevolence will not stop there.  There are plans to visit the North Western side of the island where residents have been affected by the through system, though not so severely.  The faculty, staff, and students will now pool their thoughts and actions together to source further items to do a similar donation there.