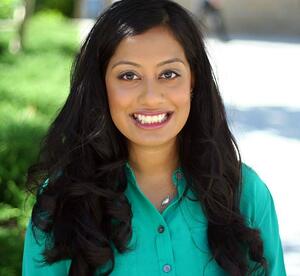 Trinity School of Medicine has always prided itself on the strength and ambition of its students. So many future physicians come our way looking for something new; whether that’s a unique learning environment built on support and a strong relationship with the faculty, a curriculum with an emphasis on clinical skills and service to patients, or just a true opportunity to live up to their potential.

In this latest edition of our alumni spotlight, meet Dr. Nazia Sharfuddin. Read about attending Trinity, the opportunities and perspectives she gained from her time there, and Dr. Sharfuddin and her husband’s paths into public speaking and documentary film making.

What brought you into medicine?

I have always wanted to work at the intersection between science and serving society. As a child in Bangladesh, seeing the poverty around me sparked my passion to help people. At the same time, I loved school, specifically science, and grew to discover that the field of medicine provided the perfect mix of my values and scientific passions to serve society.

I love being a doctor from start to finish every single day. Residency is very intense – the long, demanding hours, difficulties of work-life balance, the notion of “being married to a job”. However, I embrace this opportunity as an honor and a privilege that I get to live my dream everyday.

What made you pick Trinity?

I first came across Trinity in an email from the Princeton Review after I took the MCAT. Trinity was seeking University of Toronto graduates with strong undergraduate performance. I just finished a Bachelor’s of Science at University of Toronto, had a good MCAT and GPA, and thought I fit the bill. I had also applied to medical schools in Canada, but was not accepted.

I have always worked through barriers to get to my goal, so I set up a meeting with Dr. Miller. [ed. Trinity School of Medicine registrar Dr. Michael Miller]. I liked what he had to say about the school, so I went to New York City for my interview with Dr. Miller and Mr. Hollers [ed. Keith Hollers, Trinity’s director of student services]. It felt like a really good fit right away. Much like picking medicine, going to Trinity became a very obvious choice. I was fortunate to end up there as Trinity allowed me to have an incredibly rich experience – both academically and personally.

Any particular memories of life on campus?

I helped found the Society of Medicine and Surgery (SMS) along with Kenneth Reyes, Chris DeNapoles and Jo Roberts. We are friends to this day. We had a three prong approach for SMS to serve our fellow students and the greater community of St. Vincent.

The first was academic development. We held clinical workshops such as suturing skills, cast making, ECG reading tutorials, and small study groups to help with daily clinical learning and prepare for clerkships and board exams.

The second area was medical outreach. We spearheaded many awareness campaigns. These included setting up at the largest local grocery store and spending an entire day doing a free cardiovascular clinic. Anybody could drop in, and we would do a quick check up. If we identified risk factors, we would counsel them on going to see their doctor or going to Milton Cato Memorial Hospital. Similarly, we visited rural communities to conduct seminars on asthma and diabetes awareness, which were major medical concerns in the country. We also liaised with the government to help with hurricane relief work.

Finally, the third leg was research. Through the cardiovascular awareness campaign, we collected data that was presented at the cardiovascular symposium on campus. It was my first experience being part of a medical research team and I am proud that our work was well-received.

What were clinical clerkships like for you? Did you feel prepared?

I loved them. I owe so much to my clerkships. I was in Washington DC for 90% of them [ed. this was before Trinity consolidated its core clerkships to Baltimore, MD.] I was fortunate to work with preceptors who were leaders in the field, who offered not only clinical expertise, but invaluable mentorship that helped me grow both professionally and personally. Moreover, I was exposed to a wide variety of populations and diseases in a dynamic city that contributed to my clinical skills toolbox and cultural competency. Spending time in Washington D.C. and the immediate surrounding areas of northern Virginia and Baltimore was a very rewarding experience, that enriched all aspects of my life.

Where are you now?

I am in my internal medicine residency in Calgary, Alberta. For some context, in Canada, internal medicine is a specialization; it is not part of primary care. Internal Medicine is a natural attraction for me. I enjoy the challenge, the complex diseases, the dynamic nature of the problems, all of it. It calls upon my love of intellectual stimulation and demands resourcefulness and compassion.  It is the perfect fit and the reason I am so excited to go to work evry single day.

During residency, I helped start a mentorship program for internal medicine residents and medical students at the University of Calgary.  Physician burnout is an issue that is important to me. As such, I was selected to join a group of 20 residents across Canada to participate in a focused resiliency course with the aim to bring that back to my home institution. I am currently helping to design a resiliency curriculum at the University of Calgary medical school. I am also a part of my residency program’s resiliency committee. Finally, I am involved in work with IMGs, in terms of transitioning to residency.

I have a habit of diving into the deep end on things. I am passionate about advocacy and representation of my peers and the broader society, especially those from vulnerable populations. Just like medicine is the intersection of science and helping others, I am at the intersection of incredibly busy and incredibly happy. It’s a good place to be.

In Canada, we are required to engage in research projects during residency. I have been fortunate to take part in projects that tackle topics I am very passionate about. [ed. when preparing this piece, I spoke in passing with Trinity registrar Dr. Mike Miller, who remembers Dr. Sharfuddin’s time at Trinity very well. He said that Dr. Sharfuddin was one of the hardest working and most energetic people he had ever met. I am hard-pressed to disagree.]

My first major research project in residency was a quality improvement initiative focused on reducing health disparities by improving access to specialist care for vulnerable communities. This was presented as a poster in a Quality Improvement conference in Alberta where it was named as one of top three posters and featured on the Alberta Health Services [ed. PDF warning].

I am also very keen on clinical medicine. I presented a case report identifying a form of acute kidney injury associated with an oral anticoagulant as a poster at the Canadian Society of Internal Medicine (pictured above, left). I was fortunate to be awarded the PGME (postgraduate medical education) Leadership Travel Grant for this project. Additionally, I am looking forward to June when I will be presenting this case report at a nephrology conference in Italy.

Do you have any advice for current and future Trinity students?

I would say do not underestimate the importance of hard work. Charting my own path has taught me resilience and perseverance, both necessary traits for achieving results in residency and beyond. At times, the process of becoming a doctor can feel very frustrating. It can be an extremely competitive and daunting path, but if this is what you want to do and cannot imagine anything else, it is all definitely worth it.

Also, take advantage of the opportunity presented to you by your professors, clinical preceptors and mentors. The professors at Trinity, as well as my preceptors in clerkships, guided me so much. Their time and advice were invaluable. They don’t just teach you course material, they open doors and guide you through them if you ask questions and listen. Lastly, do not be afraid of trying new things and connecting with people different than you. Trinity is very culturally diverse, with students coming from all walks of life. During my time at Trinity, my peers and I became very close knit through our shared experiences. One of the most important aspects of my medical journey was the relationships I made at Trinity. My husband has never been to St. Vincent, but I want to take him there one day, so he can see for himself the place that means so much to me.

As if you don’t have enough on your plate, you and your husband have had a lot of excitement lately through a speaking tour and documentary film. Would you care to fill us in?

Sure! Storytelling is my passion. Last year, my husband and I were talking about his unique upbringing growing up Muslim in a small town in Newfoundland, an island on the east coast of Canada. At the time, Clarenville had a population of about 4,000 people, where he and his family were one of the few South Asian-Muslim Canadians in the area. The community made them feel appreciated and included, and he credits a lot of all that he has achieved in his life to his positive upbringing in Newfoundland. It is a very Canadian story of inclusion and what happens when we open our arms and communities to people who may look different.

Long story short, his story became a speaking tour that we did around Newfoundland last fall, travelling over 2000 km visiting 7 towns in 11 days. We pitched his story to a award winning Toronto filmmaker we had met serendipitously one day, who immediately jumped on board. Of course, we didn’t have the kind of finances to back a film, so we tried crowdfunding and raised our entire budget of $15,000 CAD from over 100 amazing donors from 19 countries in just under a month. It was wonderful to see the diverse group of people who helped sponsor our film. The documentary, Salaam B’y: A Story of a Muslim Newfoundlander, has gotten an incredibly positive response, so far.

The CBC did a short radio documentary themselves on the speaking tour and the film. We have received lots of other press as well. The most recent being a Global News interview that happened the day of the premiere in Nova Scotia. I am not sure how we managed to get it all done, but we are so happy we did. We could not have imagined everywhere it has taken us already. It was nominated for best short documentary at Toronto’s Redline International Film Festival.

In light of everything you have going on, we are as surprised as we are grateful that you carved out the time to speak with us today, Dr. Sharfuddin. Thank you so much, and thank you for making Trinity so proud!